Touch Tables and Surface Computing: Past, Present, and Future

Touch tables—and the way they’re used in museums and other public spaces—have evolved tremendously in the fourteen years since Ideum’s first table went on the market. 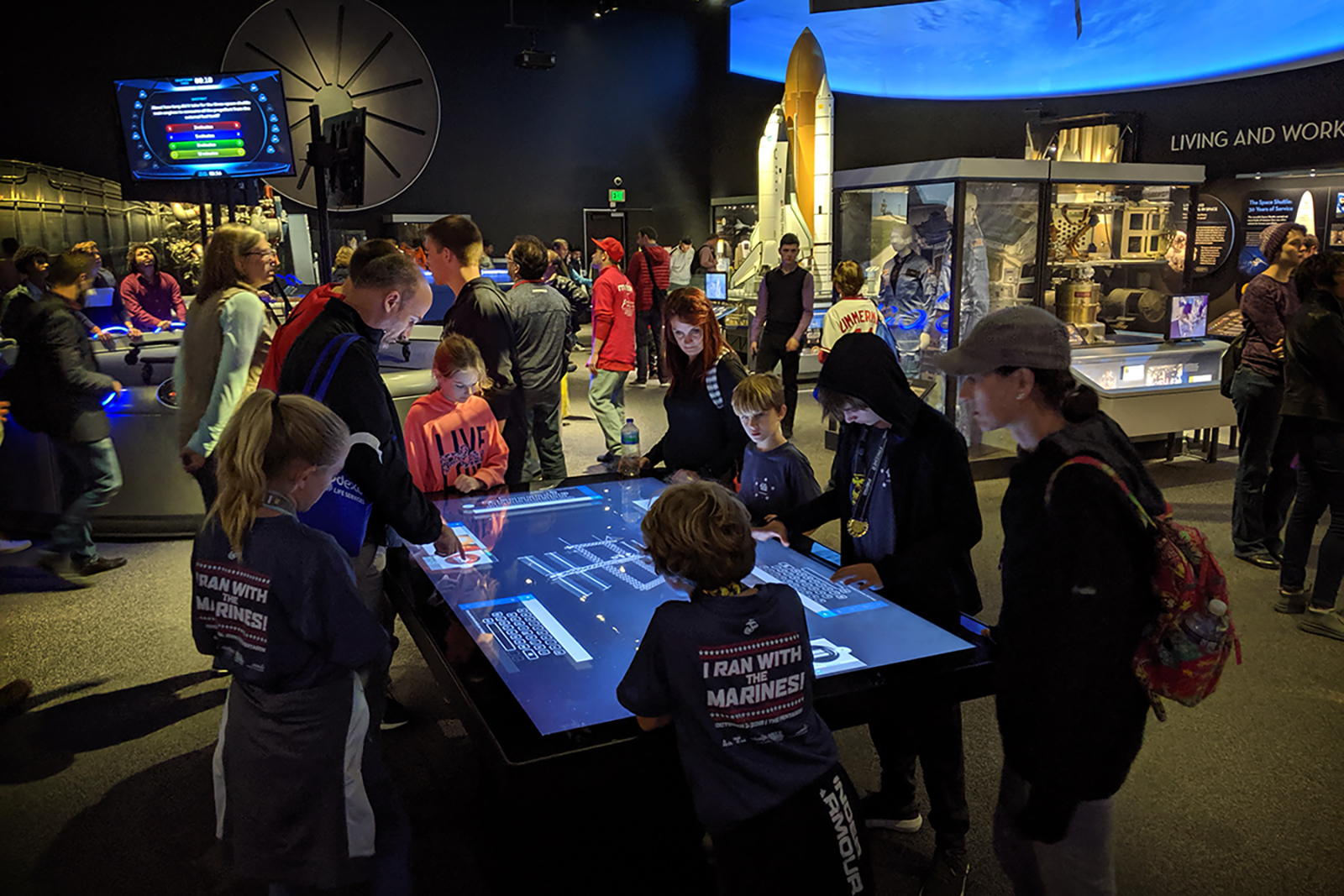 Fourteen years ago, Ideum introduced our firm’s first touch table. At the time, there was a great deal of excitement surrounding developments with large format multitouch systems. Although our early touch tables were configured with low-resolution projectors and infrared touch recognition, they still found their way into the most popular tech blogs of the day (Slashgear, Engadget, and others). While touch tables are much more commonplace now and rarely make the tech blogs, that certainly wasn’t the case when we started out.

Back then, Microsoft and eventually Samsung were Ideum’s biggest competitors. There were other smaller firms like ourselves, but most of those companies have either moved in a different direction or ran into trouble in the intervening years. Most of our competitors in this space are newer and release competitive touch products in response to our own (sometimes with an uncanny resemblance to our established models). We are flattered, but we also recognize that our long and continuous efforts in developing this technology give us a deeper understanding of this unique form factor and how it can be used effectively in a wide variety of settings.

The most important developments in touch table technology over the past decade or so have been improved resolution and the move from optical touch technology to projected capacitive touch (PCAP), the same non-optical technology your smartphone uses. Our first touch table had a resolution of 1024 x 768, and it used infrared technology along with IR cameras that would detect “blobs” (touchpoints) on the surface of the glass.

These initial optical systems required calibration and were susceptible to light interference. We also used first-surface mirrors to keep the size of the enclosure small enough to meet ADA height requirements. A few years later, we introduced our first LCD models which used an infrared bezel for touch. These were more reliable, and since the IR sensors were presented at an angle (a frame around the display), light interference was less of an issue.

This move “forward” to these IR overlay models also had some limitations. Unlike their optical predecessors, they had fewer touchpoints and they didn’t support tangible objects. Still, the increased resolution they offered allowed us to introduce the first 4K touch table.

The next step was the move to the PCAP touch technology we still use today. Our touch sensors are primarily based on 3M sensors (now owned by TES), but we also use sensors from Zytronic and Displax. This move to PCAP provided a bezel-less design with 80 touchpoints. Soon after, we also developed a robust technology for tangible object recognition known as Tangible Engine.

And the evolution continues: next month, we will be introducing the world’s first 8K touch table! This new 75” model will be our first production unit to support this higher resolution. We are quite proud of our hardware team, who continues to innovate and break new ground with this technology.

These days, many—perhaps even most—new museum exhibitions include exhibits built around multitouch tables. And why not? Touch tables are reliable and can facilitate multiple users, and they are great for displaying digital assets like collections or maps. Tabletop exhibits have been used in science centers for decades as hands-on exhibits. These qualities are part of the reason we became interested in touch tables in the first place. Back when we developed our first touch tables, most touch screens in museums were presented in ATM-like kiosks that only accommodated one visitor at a time and didn’t have the social qualities we saw first-hand with tabletop exhibits. (My own experience was from the Exploratorium, where I worked in the 1990s, which produced some very interesting tabletop exhibits, such as Turntable, where we saw social interaction, experimentation, and deep and playful engagement with a wide range of visitors.)

Touch tables can provide similar experiences, but of course, these types of interactions are dependent on well-designed software. Over the years, as we’ve been developing our touch tables, we’ve also been designing interactive experiences. Many of our competitors simply provide the hardware. Our experience in creating interactive exhibits helps us better understand how touch tables are used and allows us to improve the hardware in the process. The relationship here is symbiotic: the more we know about the hardware, the better we are at developing compelling and reliable software, and vice versa. We're also in a better position to support other developers as they look to create new touch table experiences.

Along with designing custom exhibits and supporting software such as Tangible Engine, our team has also conducted research on visitor accessibility. For example, we’ve published a white paper on ADA and ETSI standards for height and reach for touch tables and interactive displays. In addition, we’ve worked on audio accessibility for surface computing. We remain one of the few firms that have explored accessibility for these increasingly popular devices.

In addition to experiences designed for museums, we’ve seen touch tables become a standard form factor for trade shows, conferences, and other events. Over the years, through our touch table rental program, we’ve worked with hundreds of clients to support their appearance at these kinds of events. In addition, our Drafting Tables and Presenter Displays on motorized stands have become increasingly popular for AEC (architecture, engineering, and construction) clients for viewing and markup for drawings.

We are also seeing more adoption in retail, real estate, and other industries. This growth, just like that of trade shows, has been heavily impacted by the pandemic, but we’re already seeing an uptick in interest as the pandemic eases. In the near future, we also expect to see more adoption for food and beverage applications, again put on hold due to the pandemic. We’ve already been involved in early experiments with user experiences that involve tangibles, such as our work with Starbucks and JCB wines.

Along with expanded new markets, we will continue to see improvements in technology and new ways of incorporating touch tables in various settings. Along with a move to 8K, we expect to see touch tables increasingly incorporated into custom furniture, making the experience more seamless. A few years back, we introduced our Inline displays, a series of large-format open frame monitors with 4K resolution designed to be integrated into custom furniture or cabinetry. We are still the only company I know of that offers these larger-sized open frame displays at 4K resolution. (ELO has an open frame 43” display, but it is only HD resolution.) These displays continue to be popular, particularly with AV integrators and fabrication partners. Our touch displays can thus become an integrated part of the architecture, exhibition, or furniture, rather than stand-alone items.

In addition, tangibles continue to be popular, and are quite compelling from a user experience standpoint. Physical objects can help reinforce the educational or marketing message of an exhibit, and their tactile quality can extend and deepen the visitor experience. Five years ago, we published a white paper on design approaches for tangible objects. Since then, our design approach has evolved, and several competitors (and partners!) have also introduced their own tangible software. I would expect more activity from a number of firms in this area. At Ideum, we also intend to revive our smart tangible project (another initiative temporarily sidelined by the pandemic).

Along with new tangible applications, design paradigms for touch tables will continue to evolve. While web and mobile applications have plenty of existing design conventions, touch tables are still unique and provide new and fertile ground for innovation in design approaches. There’s still lots to learn, and our clients and our creative team will be developing new touch table projects in 2022. We will also be extending existing design techniques and exploring new ones. So stay tuned: we will be sharing more about designing visitor experiences for touch tables later this year! 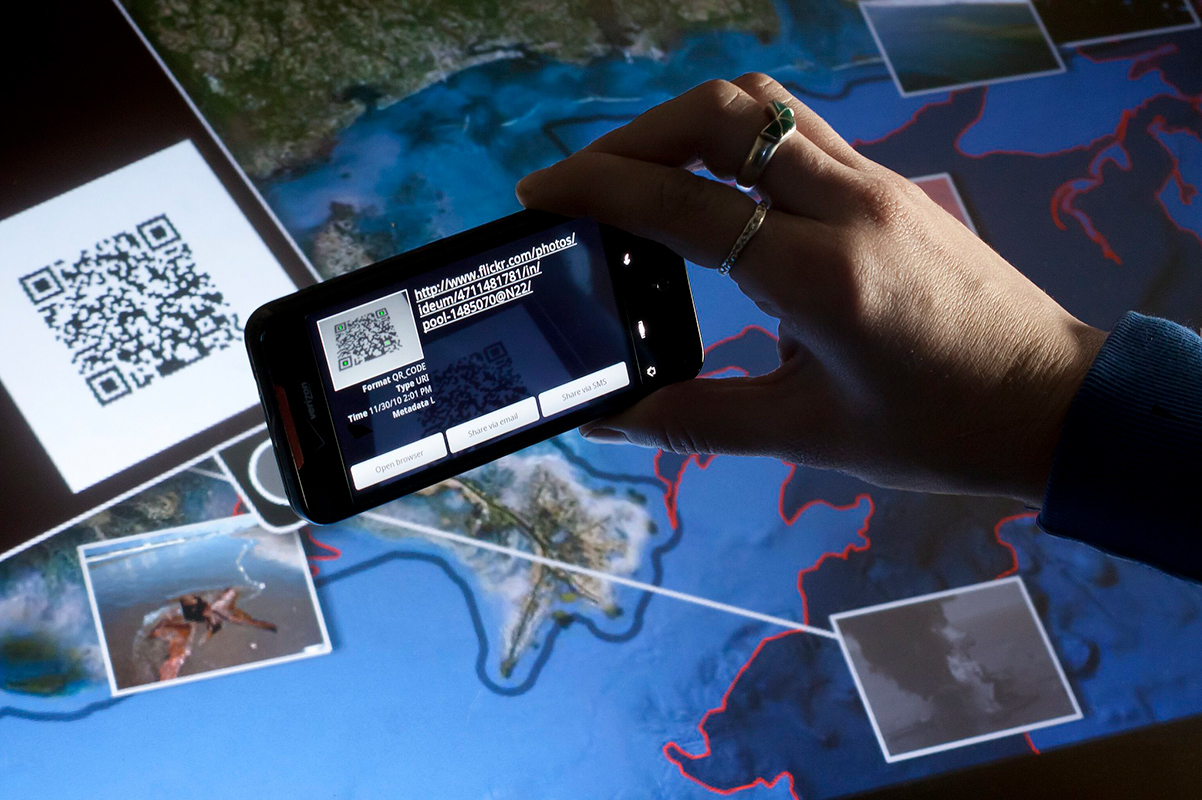 In 2010, Ideum developed a mashup that used maps, Flickr photos, and NOAA data showing the extent of the BP Gulf of Mexico oil spill. This application ran on an early Ideum touch table. 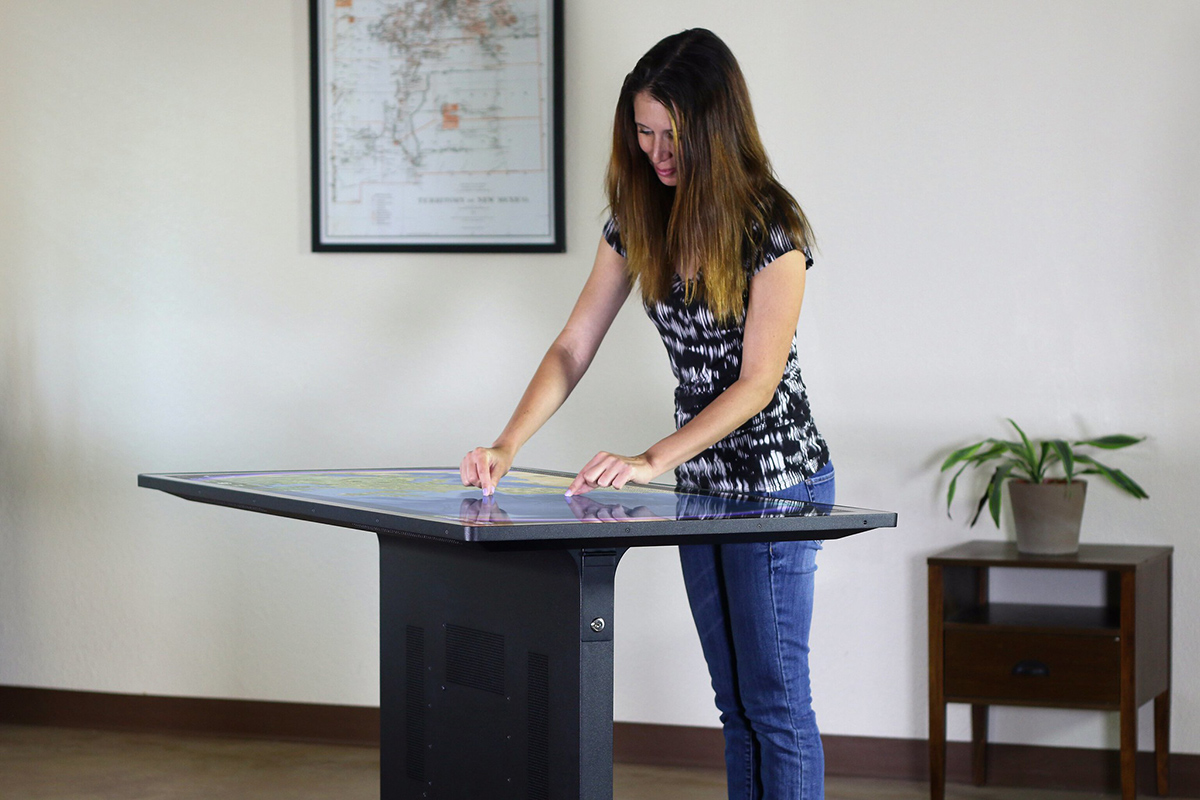 The Ideum Platform Touch Table circa 2014. 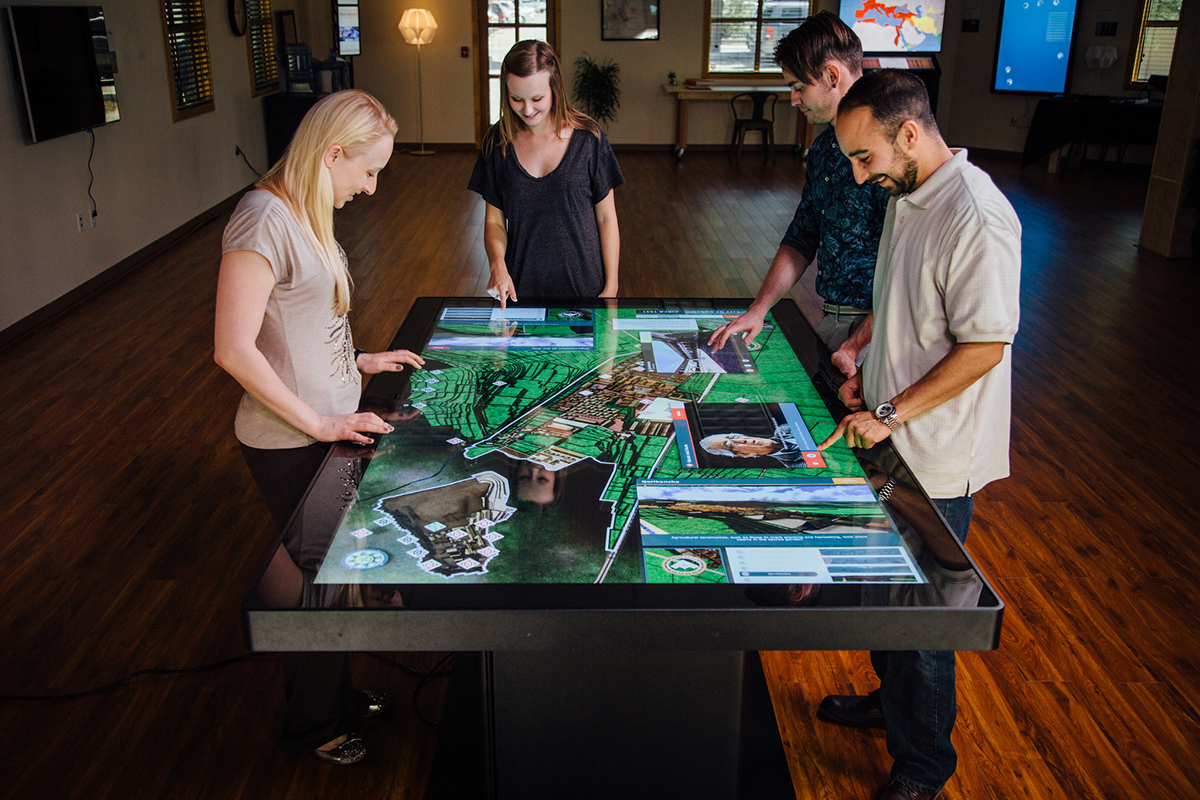 Ideum staff testing The Great Inka Road Interactive in 2015, which we developed with the Smithsonian National Museum of the American Indian (NMAI). The exhibit runs on the first version of the Colossus touch table. 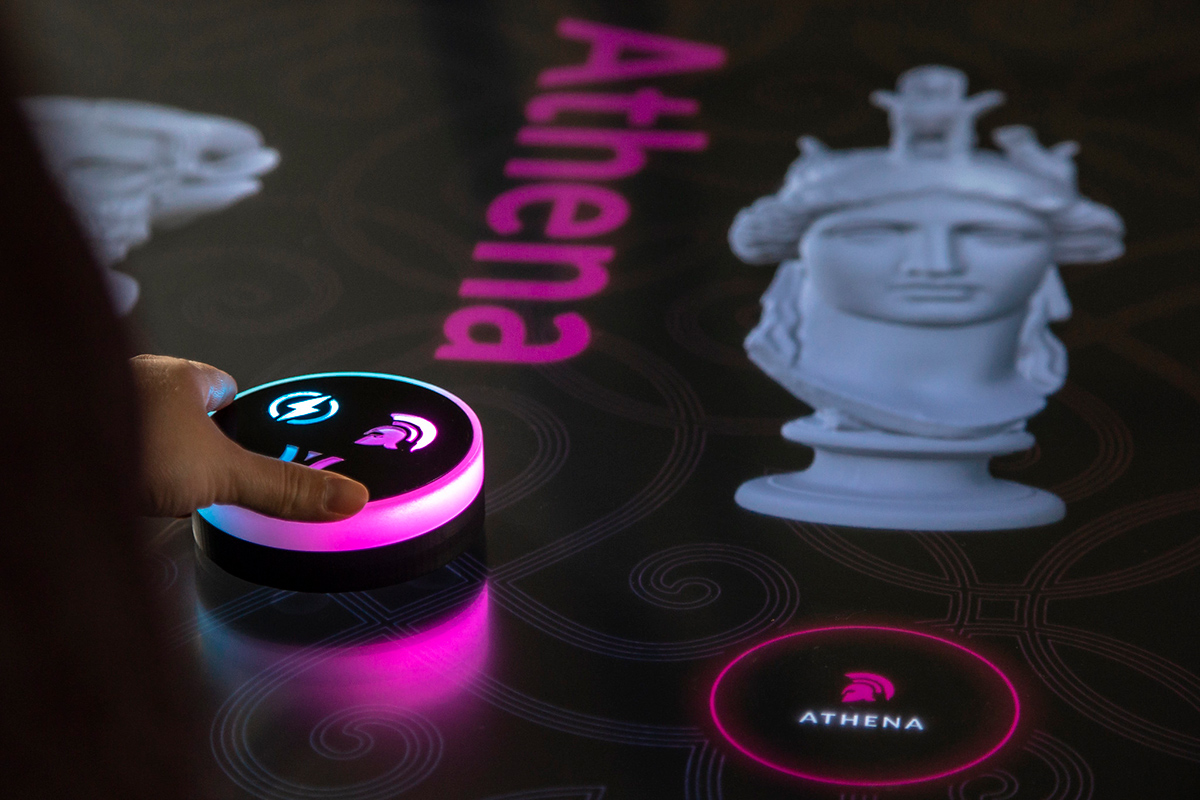 Smart Tangibles, like the name suggests, have embedded electronics and add a new layer of interactivity. 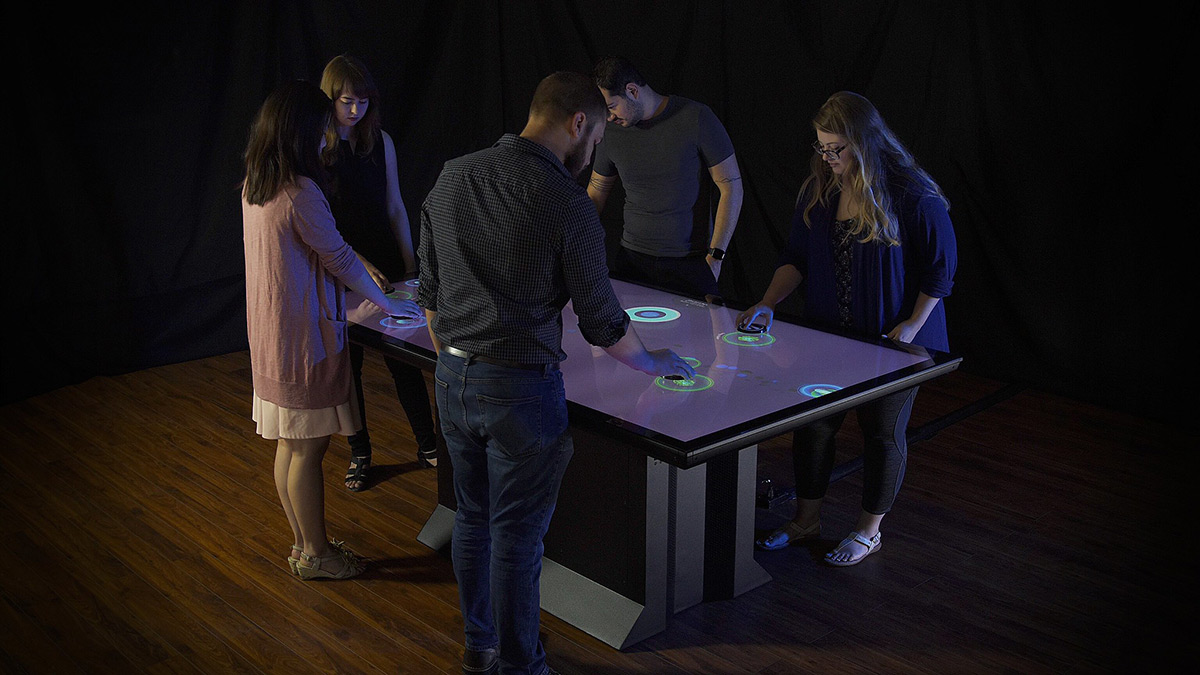 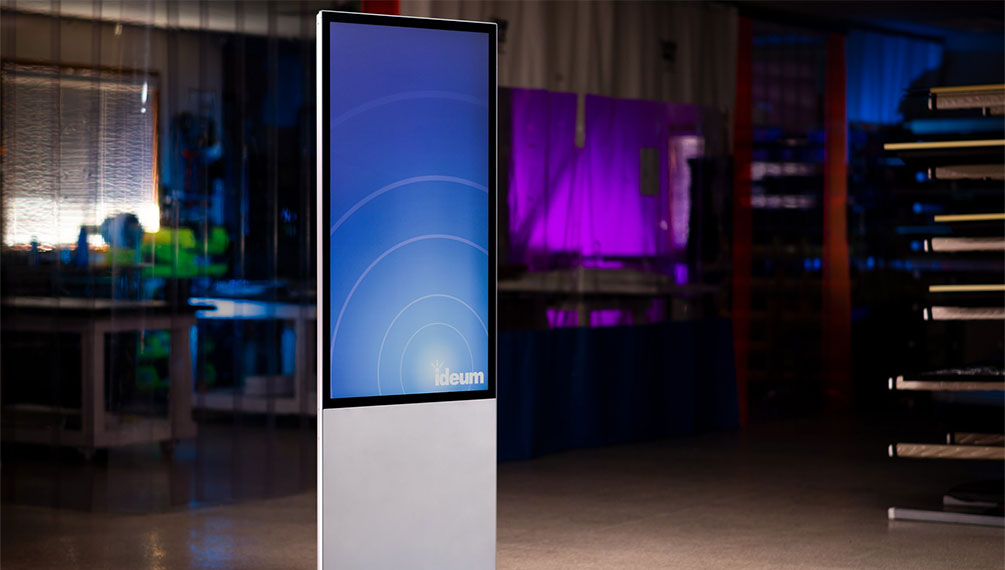